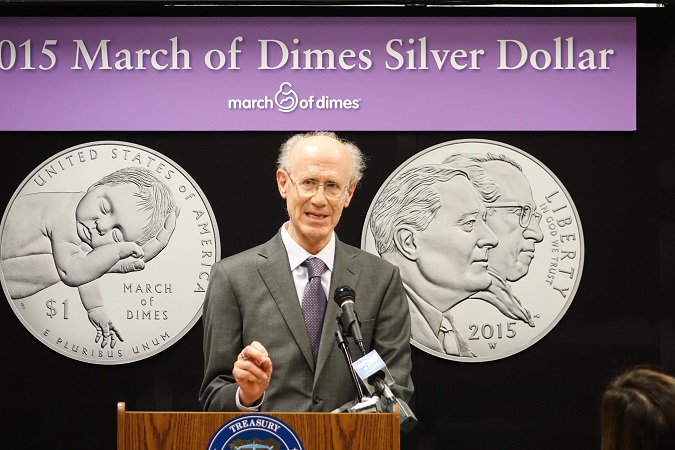 Dr. Peter Salk reveals the March of Dimes Silver Dollar featuring his father, Dr. Jonas Salk. April 12th is the 60th anniversary of the announcement that the Salk Polio vaccine was “safe and effective”. Coins can be purchased at 1.usa.gov/1MoGVwF. The March of Dimes is authorized to receive $10 from each silver dollar sold to help more moms have full-term pregnancies and healthy babies. (photo March of Dimes Foundation)

Vaccines are as critically important today as they were 60 years ago when the first polio vaccine, developed by Dr. Jonas Salk and his research team, was declared safe and effective.

April 12th marks the 60th anniversary of the day polio, “the killer, the crippler,” began loosening its grip on children nationwide.

The Centers for Disease Control and Prevention (CDC) calls vaccines one of the ten greatest health achievements of the 20th century. Yet measles and whooping cough are two examples of vaccine-preventable diseases that are on the increase as a result of declining immunization rates.

“Vaccines defeated diseases like polio, measles and pertussis,” says March of Dimes Chief Medical Officer Edward R. B. McCabe, MD, PhD. “Those vaccines were successful because of consistent, long-term efforts. This recent lapse in our vigilance and commitment allowed these deadly diseases to return and spread. The March of Dimes remains a staunch advocate for vaccination of all children and pregnant women in accordance with the CDC’s recommendations.”

Founded in 1938 by President Franklin D. Roosevelt to combat polio, the March of Dimes funded the development of the Salk and Sabin polio vaccines, and launched an immunization campaign that eliminated polio from the United States by 1979.

“These vaccines have brought this terrible epidemic disease under control that once killed or paralyzed thousands in this country each year. They had a tremendous impact on the nation, and with their use, the world is now on the brink of eradicating the polio virus completely,” says Peter L. Salk, MD, president of the Jonas Salk Legacy Foundation, a physician, medical researcher and the eldest son of Dr. Jonas Salk. “It is fitting to remember, during this 100th anniversary year of my father’s birth, that we can come together in the same way to solve other significant problems affecting the health of humanity.”

The United States Mint recently released a commemorative coin celebrating the March of Dimes history -- from conquering polio to championing the health of babies -- featuring Franklin D. Roosevelt and Dr. Jonas Salk, who were united by the March of Dimes work to conquer polio in the 1950’s.

“Holding the coin is holding a bit of the past, present and future in your hands,” says Elizabeth Roosevelt Johnston, FDR’s great-granddaughter, whose twins were born too soon and benefitted from the March of Dimes work. “This anniversary is very important to me. I’m proud to be connected to the March of Dimes, because this is a great organization that continues to help all babies get a healthy start in life.”

Today, the March of Dimes, the leading non-profit organization for maternal and infant health, is hard at work to reduce the epidemic of premature birth, which affects nearly a half million babies in the U.S. and 15 million worldwide. In 2011, the organization established the March of Dimes Prematurity Research Center at Stanford University School of Medicine, bringing together the brightest minds from many disciplines to work together to determine the causes of preterm birth. The Ohio Collaborative, a partnership of the leading academic institutions, children’s hospitals and medical centers in Cincinnati, Columbus and Cleveland, was launched in 2013. Last year, research centers opened at Washington University in St. Louis and at the University of Pennsylvania. A fifth center is planned.

With chapters nationwide and its premier event, March for Babies, the March of Dimes works to improve the health of babies by preventing birth defects, premature birth and infant mortality. March for Babies is supported by number one corporate supporter, Kmart, and top sponsors Famous Footwear, Macy’s, Cigna, United Airlines and Mission Pharmacal.

March of Dimes leads the fight for the health of all moms and babies. We support research, lead programs and provide education and advocacy so that every family can have the best possible start. Building on a successful 84-year legacy, we support every pregnant person and every family.