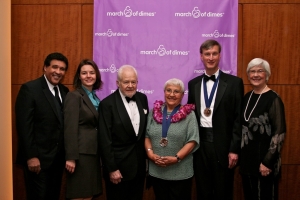 Two scientists who pioneered research on the X and Y chromosomes have been chosen to receive the 2011 March of Dimes Prize in Developmental Biology.

Patricia Ann Jacobs was the first to describe a human sex chromosome abnormality with her landmark 1959 paper on Klinefelter syndrome, a disorder involving an additional X chromosome.

David Page’s studies of the Y chromosome revealed its role as a complex genetic system with many specialized functions, far beyond determining male sex.

“Taken together, the research of Patricia Ann Jacobs and David Page has expanded medicine’s ability to diagnose and understand the basis of infertility and many other diseases,” said Michael Katz, MD, senior vice president for Research and Global Programs at the March of Dimes.

The prize was presented today to Patricia Ann Jacobs and David Page at a gala black-tie dinner and ceremony held at the Four Seasons Hotel, here. They also delivered the Sixteenth Annual March of Dimes Prize Lecture at the Colorado Convention Center at the annual meeting of the Pediatric Academic Societies. CBS sportscaster Greg Gumbel, member of the March of Dimes national Honorary Board of Trustees, hosted the award ceremony.

Individuals who receive the March of Dimes Prize are leaders in the field of developmental biology. Their pioneering research offers hope for prevention and treatments for some of the most serious birth defects and other human diseases.

The March of Dimes Prize in Developmental Biology has been awarded annually since 1996 to investigators whose research has profoundly advanced the science that underlies the understanding of birth defects. The March of Dimes Foundation created the Prize as a tribute to Dr. Jonas Salk shortly before his death in 1995. Dr. Salk received Foundation support for his work to create a polio vaccine. The prize is a cash award of $250,000 and a silver medal in the design of the Roosevelt dime, in honor of President Franklin D. Roosevelt, who founded the March of Dimes.

In its 16-year history, the March of Dimes Prize in Developmental Biology has been the crowning glory of a distinguished research career or a stepping stone on the path toward future honors for researchers. In fact, five past March of Dimes Prize recipients have gone on to win a Nobel Prize®.