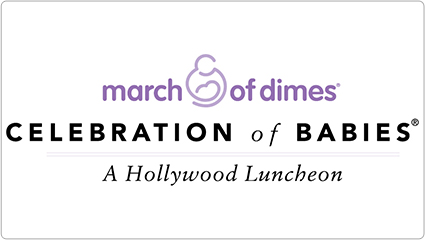 March of Dimes Celebration of Babies® builds on the nearly 80-year relationship between the entertainment industry and March of Dimes. Beginning with the fight to eradicate polio and continuing to today’s mission to prevent birth defects, premature birth and infant mortality, March of Dimes and the Hollywood have worked together to improve the health of moms and babies.

You can help this effort by donating today. The money we raise at this event helps the nearly 4 million babies born in the United States each year through March of Dimes research, education, support, and advocacy.

This year we honor: Jessica Alba, actor and founder of the Honest Company, with the 2015 March of Dimes Grace Kelly Award. The award recognizes a celebrity mom for her commitment to help families and give all babies the healthiest start in life; Bela Bajaria, President, Universal Television, as the 2015 Inspiring Woman of the Year for her accomplishments as a leader in the entertainment industry and as a dedicated mother; and Dr. Michele Hakakha, board-certified obstetrician and gynecologist, with the 2015 March of Dimes Prematurity Champion Award for her dedication and special interest in caring for patients with high-risk pregnancies.

The event is co-chaired by President of Universal Pictures Jimmy Horowitz, his wife Joi and producer Wyck Godfrey and his wife Mary.

Adrianna Costa will be our red-carpet host and Nick Cannon will serve as master of ceremonies.

March of Dimes has long-standing ties to the Hollywood community. Since its founding in 1938, supporters over the years have included Frank Sinatra, Elvis Presley, Marilyn Monroe, Eddie Cantor, Grace Kelly, Lucille Ball & Desi Arnaz and Sammy Davis Jr., to name a few.