Identifying the causes of birth defects

Identifying the causes of birth defects 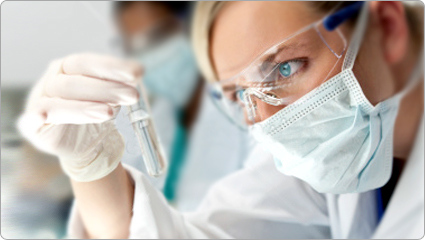 Some birth defects are caused by a mutation (change) in a single gene. In 1991, Stephen Warren, PhD, a March of Dimes grantee at Emory University in Atlanta, Georgia, identified the gene that causes fragile X syndrome, the most common inherited cause of intellectual disabilities. Since then, scientists have learned that the mutation 'turns off' the fragile X gene so that it does not make the protein it normally makes.

The fragile X protein appears to regulate the production of a number of proteins that play key roles in the development and functioning of synapses, nerve-cell junctions where impulses are transmitted from one brain cell to another. Loss of the fragile X protein appears to disrupt communication at the synapses, contributing to the learning and behavioral problems. Discovery of the gene and its workings are now leading to development of treatments. Dr. Warren and other scientists have identified drugs that may help correct synaptic miscommunication, and studies of their effectiveness are underway.

Many other birth defects appear to be caused by multiple genes and environmental factors, adding to the complexity of understanding their causes. For example, March of Dimes grantees have discovered genes that contribute to heart defects and to cleft lip/palate, both of which are among the most common birth defects. However, in most cases, the causes of these defects remain unknown.

Current grantees are seeking to identify genes that may play a role in other common birth defects.  For example, Gabrielle Kardon, PhD, of the University of Utah in Salt Lake City, aims to identify genes that contribute to congenital diaphragmatic hernia (CDH), an opening in the large muscle separating the chest and abdominal cavities.  Babies with CDH often die or develop severe breathing problems due to underdeveloped lungs.

Grantees also aim to identify teratogens, environmental exposures that can cause birth defects. For example, in 1973, March of Dimes grantees were the first to link drinking alcohol during pregnancy to a specific pattern of birth defects and intellectual disabilities they called fetal alcohol syndrome. Once a teratogen has been identified, pregnant women often can take steps to avoid it, thereby preventing birth defects.

However, there are more than 83,000 chemicals used in this country, with little information on the effects of most of them during pregnancy. Some grantees are working to provide pregnant women with the information they need to protect their babies. Marisa Susan Bartolemei, PHD, a grantee at the University of Pennsylvania in Philadelphia, is investigating whether prenatal exposure to bisphenol A (BPA), a chemical commonly used in plastics and food and beverage containers, may disrupt the actions of certain genes, possibly contributing to birth defects.  Federal health officials have expressed some concern about possible health effects of BPA on fetuses, infants and young children, and Dr. Bartolemei's study may hep clarify the safety of BPA exposure during pregnancy.

Grantees also seek to improve understanding of how genes and environmental exposures may interact and contribute to birth defects, such as kidney defects.  Jonathan Barasch, MD, PhD, of Columbia University in new York City, is studying how maternal iron deficiency, which occurs in at least 15 percent of pregnancies, may affect the actions of genes that deliver iron to the developing kidney, possibly contributing to kidney defects.  This study could ultimately lead to ways to prevent kidney defects, which can lead to kidney failure and death.