Family to speak at March for Babies at Olde Mistick Village on Saturday, May 7th 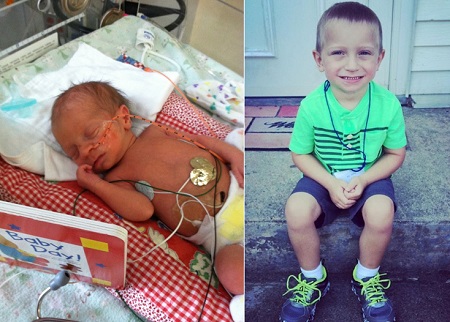 On Saturday, May 7th, hundreds from the Connecticut shoreline communities will gather for March for Babies at Olde Mistick Village to benefit the March of Dimes.  Leading the festivities will be the event’s 2016 Ambassadors, Melissa & Nicholas Brothers, along with their three-year old son, Wiley. They will share their family’s prematurity journey, thank walkers for their commitment to the March of Dimes mission to give all babies a healthy start, and lead the walk with their team, “Wiley’s Walkers.”  Since their first walk in 2012, their March for Babies team has raised nearly $10,000.

In 2012, Melissa and Nicolas were looking forward to the April birth of their first baby.  But for Melissa, health complications arose and on Valentine’s Day, she was diagnosed with HELLP Syndrome, a potentially life-threatening pregnancy complication usually considered to be a variant of preeclampsia (high blood pressure).  After one month of bed rest, her symptoms became very painful and she went to the hospital.  After discovering that the HELLP syndrome was causing severe distress to her liver, the decision was made to deliver Wiley for the health of both mom and baby.  Six weeks too soon, Wiley was delivered via emergency c-section at Lawrence and Memorial Hospital and weighed just 3 lb. 15 oz.

“I had a complicated pregnancy so we felt like we were on an emotional roller coaster the entire time.  To say we were unprepared is an understatement.  I went to the hospital on March 13th not expecting to have an emergency c-section first thing the next morning.  I didn’t have a bag packed.  I didn’t even have any baby clothes,” said Melissa.

Wiley spent 17 days in the neonatal intensive care unit before finally coming home with his parents.

“Today, Wiley is nearly four years old and is very active.  He loves being outside, playing with trucks, going for rides on his tractor, and dancing,” said Melissa.

Each year in Connecticut, more than 36,000 babies are born.  1 in 10 babies are born too soon, 1 in 7 infant deaths is attributed to a birth defect, and nearly 200 babies die before reaching their first birthday.  The mission of the March of Dimes is to prevent birth defects, premature birth and infant mortality through research, education, advocacy and community programs.

“We are extremely grateful and are hoping that, as the Ambassador family, we can shine some light on the commitment the March of Dimes has to ensure that someday all babies are born healthy,” said Melissa.

March for Babies participants can meet Wiley and hear their story at March for Babies at Olde Mistick Village on Saturday, May 7.  Registration begins at 9:00 a.m. with the walk kicking off at 10:00 a.m.  To register visit marchforbabies.org/event/greatermystic or marchofdimes.org/ct.