Healthy Babies are Good for Business 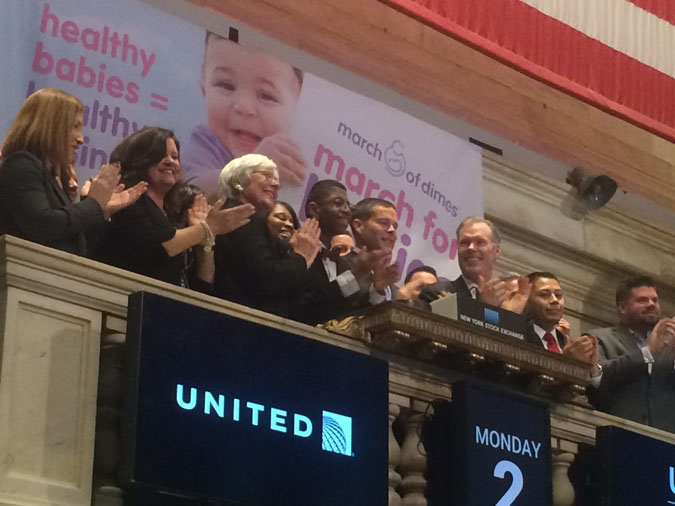 United Airlines knows healthy babies are good for business and is sharing that message with corporations worldwide by ringing The Closing Bell® today at the New York Stock Exchange.

The event kicked off March for Babies, the annual nationwide fundraiser that supports March of Dimes research and education programs to help moms have full-term pregnancies and healthy babies. It also celebrated United’s 10th anniversary as a March of Dimes sponsor.

John Rainey, United’s executive vice president and chief financial officer and the 2015 March for Babies national chairman, along with Dr. Jennifer L. Howse, president of the March of Dimes and 12-year-old Elijah Jackson, the 2015 March of Dimes National Ambassador, his mom Elise Jackson, a long-time United employee, and dad Todd Jackson, stood together to ring The Closing Bell.

“We know that many of our customers’ and employees’ lives have been touched by the issue of premature birth, and we are proud to support the March of Dimes in its mission to bring healthy babies into this world,” says Mr. Rainey. “We are honored to be here at the global capital of commerce to focus on the importance of reducing both the financial and emotional cost associated with preterm babies.”

Along with serving as the official airline sponsor of the Ambassador Program, United is a national sponsor of March for Babies, the March of Dimes' signature fundraiser. Over the past nine years, United employees have helped contribute more than $5.5 million to the March of Dimes.

March for Babies will take place in nearly 700 communities in all 50 states, the District of Columbia, and Puerto Rico April 25 and 26. March for Babies has been held annually since 1970 and has raised a combined total of more than $2.4 billion to help more babies get a healthy start in life. The goal for this year’s event is to raise more than $100 million to support the research and community and education programs that help women have full-term pregnancies and healthy babies.

“We are honored to work with companies, like United, that are committed to helping babies. Their corporate philanthropy and leadership is critical to improving the health of babies,” says Dr. Howse. “Preventing preterm birth not only help families, it is one way we can begin to rein in our nation’s skyrocketing health care costs and help businesses protect their bottom line.”

Preterm birth, birth before 37 weeks of pregnancy, is a serious health problem that costs the nation more than $26 billion annually, according to a report from the Institute of Medicine. More than 450,000 babies – one out of every nine – are born too soon each year in the United States.

An analysis by Truven Health Analytics, Inc., commissioned by March of Dimes, found that the average medical cost for a premature baby is 11 times the cost of a healthy, full-term baby from birth through the first year. For premature and/or low birth weight babies, the average cost was $55,393, of which $54,149 was paid by company health plans.

The money raised by March for Babies events supports research, education, and community-based programs that help moms have full-term pregnancies and healthy babies. March of Dimes grantees conduct research to find answers to the problems that threaten the health of babies.

You can either walk as an individual or join a team with co-workers, family or friends by visiting marchforbabies.org.