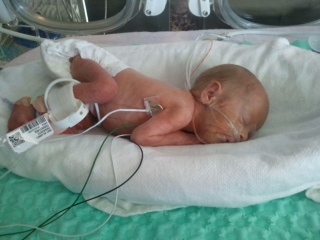 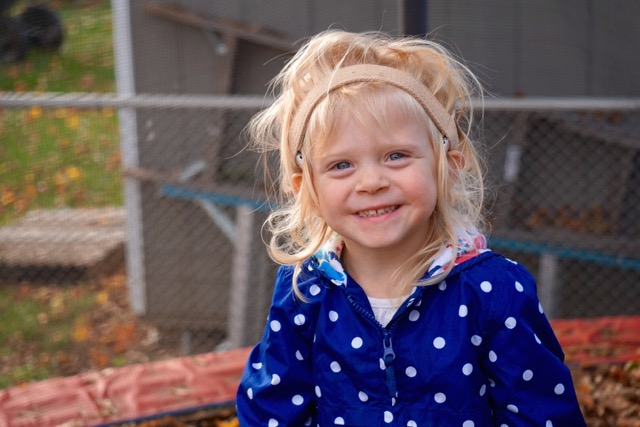 October 1, 2012 started off like any other normal Monday morning. I drove into work but was suddenly very short of breath while walking to my desk.  I called my doctor’s office and they told me to go straight to the Delaware Center for Maternal Fetal Medicine to be checked out by my high risk doctor.  After a very lengthy exam, I was sent to Christiana Hospital’s Maternity Triage Unit where I was asked to stay the night so that they could keep an eye on the baby and me.  At that point, I was given magnesium sulfate and steroids to assist with the baby’s lung development and had multiple monitors on to watch her progression.

The next day my doctor came in and informed me that I had preeclampsia and would not be leaving the hospital until my baby was born.  My first thought was “How am I going to do twelve weeks in the hospital?” Twelve weeks turned into two very short days, as Brynn Michelle decided to make her grand entrance into the world on October 4th 2012 at just 28 weeks.

Weighing in at 2.1lbs at birth, she dropped quickly to 1.1lbs within two hours of being transferred to the Christiana Hospital Neonatal Intensive Care Unit (NICU).  I was not able to see Brynn for the first twenty-four hours of her life due to my own medical concerns, but I knew that she was in great hands with the nurses and doctors.  Billy and my dad went to see her once she was situated in her incubator and they took a ton of pictures so that I could see what she looked like and how she was doing.  There was our tiny baby girl with IVs, a breathing tube, feeding tube, and multiple monitors to watch her breathing, heart rate, oxygen, and temperature.  She had two blood transfusions and a spinal tap when she was just three weeks old.

The first exciting step of our NICU stay was on October 9, 2012 when we were able to take Brynn out of her incubator for the first time to hold her to do kangaroo care.  Although it was only for a few minutes, it was the most amazing few minutes, ever.  Not being able to hold your baby after they are born for five days is a terrible feeling that I wish no parent ever has to endure.

I had heard of the March of Dimes from our neighbors who had twin girls in the NICU a few years before.  They assured my parents that the March of Dimes would be there during our NICU stay and help us in any way that they could.  The kind people from the March of Dimes checked on us regularly as we sat outside of Brynn’s incubator, provided monthly dinners for us and the other parents who had babies in the NICU, and gave little gifts to Brynn while she spent her first Halloween and Thanksgiving holidays in the NICU.

The best part was that they had a professional photographer come in once a month to capture milestones of Brynn.  These are pictures that we will forever treasure and are so grateful for. They also gave us a book on prematurity that was a great resource for us to use with all of Brynn’s new medical terminology that we were learning each day.  The March of Dimes took our difficult situation and made it as pleasant as they could. For that, we are forever grateful.

Today, Billy and I have a healthy, beautiful, and smart 3-year old daughter.  She is our miracle baby, and without the research and programs that the March of Dimes provides for premature birth, she would not be here to make us smile and laugh every day.

We are forever indebted to our March of Dimes family and for the chance they gave Brynn at life.  Please help support the March of Dimes in any way that you can because every baby deserves a fighting chance.