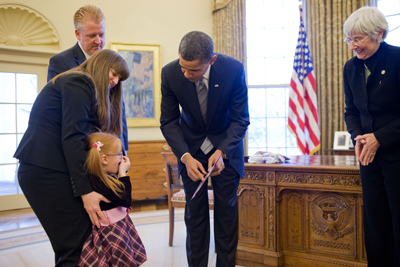 Two families who know all too well the trauma of having a baby born prematurely visited the White House today to share their inspiring stories with President Obama. The Hall family from Leesburg, Va., and the Hoffman family from Weston, Fla., are ambassadors for the March of Dimes, a nonprofit foundation that works to prevent premature birth, birth defects, and infant mortality.

“These brave families told the President that premature birth can happen to anyone, and when it does happen, it exacts a huge toll emotionally, physically and financially on families and the country,” said Dr. Jennifer L. Howse, president of the March of Dimes. “We need to invest more federal funding in research that will stop the rising incidence of preterm birth.”

Joined by LaVerne Council, secretary of the March of Dimes board of trustees and corporate vice president and chief information officer of Johnson & Johnson, the March of Dimes delegation also spoke with the President about how preterm births illustrate how critical it is for every pregnant woman and child to have access to health coverage.

Six-year old Katelyn Hall was born at only 25 weeks and was given a 5 percent chance of surviving. After a 5-month stay in newborn intensive care (NICU) and more than $1 million in medical bills, Katelyn’s parents Ashley and Michael were finally able to bring her home.

Joshua Hoffman, 7, of Weston, Florida, the March of Dimes 2010 National Ambassador, was born so early and with so many underdeveloped organs that doctors could not say whether he would survive — or if he would ever walk, talk, see or hear.

Josh spent 3½ months in the NICU and had many surgeries and treatments, including heart surgery, laser eye surgery and blood transfusions.

Premature birth has increased more than 36 percent in the last 25 years in the United States, and now affects 540,000 babies annually. It is the leading cause of newborn death and costs the nation more than $26 billion annually in health care costs, according to the Institute of Medicine.

The Hall and Hoffman families traveled to Washington courtesy of Continental Airlines, the official airline sponsor of the National Ambassador Program “Serving the March of Dimes and our community in this capacity is an honor,” said Jeff Smisek, Continental Airlines Chairman and Chief Executive Officer.