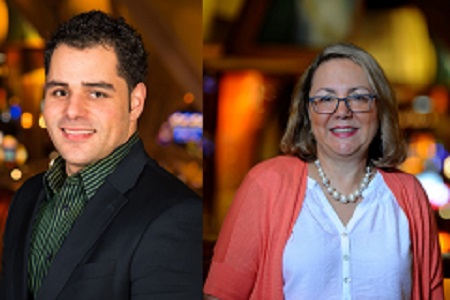 The March of Dimes Connecticut Chapter is pleased to announce that Jeffrey Hamilton, Assistant General Manager; and Patricia LaPierre, Vice President of Human Resources, both of Mohegan Sun, have been named Co-Chairs of the 2016 Greater Mystic March for Babies walk.

March for Babies, the organization’s largest annual fundraising event to support its mission to give every baby a healthy start, will be held at Olde Mistick Village on Saturday, May 7th.   As Co-Chairs, Hamilton and LaPierre have pledged to raise awareness and important funding to help babies born prematurely or with birth defects. They have made the commitment to raise $35,000 in new revenue as part of the overall event goal of $120,000.

March for Babies helps fund lifesaving research and educational programs aimed at helping moms have healthy babies. At the 2015 Mystic March for Babies event in May, over $100,000 was raised.  Next year, Hamilton and LaPierre will focus on recruiting new companies to participate and lead the community in making a difference for the health of moms and babies.

Hamilton has been with Mohegan Sun since 2004 and has held several important management positions within Human Resources and Advertising during that time. He has a Bachelor’s degree in social work from Seton Hall University and a Master’s degree in business administration from the University of New Haven.  He currently lives with his wife Cynthia and their children, Lina and Jeffrey Jr., in Cranston, RI.

“I am truly honored to have been asked to Chair such an important event. I look forward to spending the next year working with our local community and businesses to not only raise money for the March of Dimes, but to also raise awareness about premature birth and its impact on our community,” said Hamilton.

LaPierre is the Vice President of Human Resources at Mohegan Sun.  She has worked in Human Resources for the last 13 years in various positions.  She has an undergraduate degree in Liberal Arts from Providence College and a Master’s Degree in Organizational Management from the University of Phoenix.  She currently lives in Griswold with her husband Ron, and has two grown children and seven grandchildren.

“Mother Teresa said, ‘We cannot do great things on this Earth, only small things with great love.’  I look forward to working with such an important organization as the March of Dimes.  By partnering with families to fight premature birth, and educating the community on how they can help, we can make a difference, one baby at a time,” said LaPierre.

Online registration for the 2016 Greater Mystic March for Babies, presented by Mohegan Sun, is open at marchforbabies.org.  Please contact Laura Gervais with the March of Dimes Connecticut Chapter at 860-815-9356 or [email protected] for more information.