SCID is a defect in which a baby is born without an immune system, thus causing the most common of ailments and vaccinations to be life threatening as the baby’s body cannot defend itself.

“Delayed diagnosis of SCID not only has a devastating consequence on the affected infant but also on the family. Without the proper treatment, these infants die from infection before their first birthday,” stated Dr. Rebecca Buckley, Pediatric Immunologist and SCID Bone Marrow Transplant Specialist at Duke University.  “Many times these infants are seen by multiple physicians before the diagnosis is even considered, because the patient appears outwardly normal and SCID is thought to be very rare. The family of course is frustrated and devastated while watching their infant’s health worsen before their eyes.”

One family that knows all too well the effects a defect such as SCID can have is the Nugent Family of Harrisburg, North Carolina.  Stephanie and Chris welcomed Carlie into the world 15 years ago and sadly, Carlie succumb to complications from SCID at only seven-months-old.

“She seemed so healthy at birth and that’s the thing about SCID: babies appear perfectly healthy,” stated Stephanie.  “I never could have imagined that just seven short months after I brought her into this world I would be kissing her forehead, saying goodbye and watching her drift away from me.”

In early 2010, the Secretary’s Advisory Committee on Heritable Disorders in Newborns and Children (SACHDNC) recommended a core panel of 29 disorders for mandatory screening based on a thorough evidence-based review.  SCID was their 30th core condition recommended to be added to the to the newborn screening panel. Yet, due to lack of funding, the state has not been able to integrate SCID testing to the panel.

“As someone who has seen the benefit of the March of Dimes since the day I was born with a cleft lip and palate, I am always grateful to be a small part of their effort to protect our children,” stated Representative Charles Jeter. “We do a great deal around the General Assembly, rarely do we get to be a part of a bill that will do so much.  I hope this bill and its passage will help add to the incredibly important life of Carlie Nugent.”

Currently, at least 26 states require SCID screening, although it is not a very common disorder, experts estimate approximately 40-100 American infants are diagnosed with SCID each year. However, the true incidence and prevalence of SCID are difficult to determine as there is no centralized database of diagnosed cases in the United States.

“I am honored to be a Primary Sponsor of the Baby Carlie Nugent proposed law that I hope our other legislators will also be proud to pass into law,” said Representative Donny Lambeth. Lambeth went on to say, “As Chairman of the North Carolina Chapter of March of Dimes, one of my passions is to reduce the rate of infant mortality in North Carolina; by adding a simple test to the newborn screening panel we not only will save lives but also reduce the cost of healthcare. I am hoping this will be a win for babies, parents and healthcare.”

According to the North Carolina Department of Health and Human Services, Laboratory of Public Health in recent years there have been three Medicaid infants with SCID transplanted at Duke University Hospital.  The babies’ Medicaid bills each exceeded over $2.5 million.

“I don’t want other parents to have to spend the rest of their lives haunted by the idea that a simple blood test at birth was all that stood in the way of watching their babies grow up. We must test all infants at birth so we can eradicate this treatable but deadly disorder. And if, because of Carlie, other lives can be saved—and other mothers can watch their babies live full, healthy lives—her short, little life will hold greater meaning, and I will know she wasn’t taken in vain,” stated Stephanie.

For additional information contact Tiffany Gladney, Director of Communication, North Carolina Chapter of March of Dimes at (919) 424-2168 or at [email protected].

March of Dimes is the leading nonprofit organization for pregnancy and baby health. With chapters nationwide and its premier event, March for Babies, the March of Dimes works to improve the health of babies by preventing birth defects, premature birth and infant mortality. For the latest resources and information, visit marchofdimes.org or nacersano.org. Find us on Facebook and follow us on Twitter. 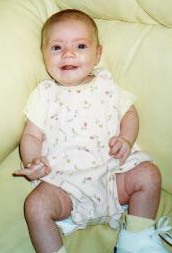