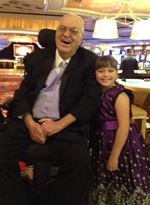 Longtime local March of Dimes volunteer Don Post has been named recipient of the 2013 NASCAR Foundation Betty Jane France Humanitarian Award and $200,000 collectively will be donated to the organization in his name. Post’s selection was announced December 6 at the NASCAR Sprint Cup Series Awards at the Wynn Resort and Casino in Las Vegas.

The Betty Jane France Humanitarian award is given annually to one dedicated NASCAR fan who has made a substantial contribution for children by volunteering their time and talents within their community. Post, 70, of Kansas City, Mo., was one of four national finalists selected by the NASCAR Foundation and received the most online votes at nascar.com/award between October 1 and December 5, 2013. He received $100,000 from the NASCAR Foundation to donate to the March of Dimes and a 2014 Chevrolet SS from Chevrolet.

“Don Post is a hero, pure and simple,” said NASCAR Foundation Chairwoman Betty Jane France. “We have so much respect for his accomplishments in the face of personal adversity along with his commitment to helping children who face their own adversity. His story is inspiring, and truly personifies what our award is all about. Not only are we honored to present him the third annual Betty Jane France Humanitarian Award, we are honored just to know him.”

Inspired by Don and in celebration of his honor, Pat Warren, President of Kansas Speedway, announced December 6 that Kansas Speedway will match the NASCAR Foundation gift and donate an additional $100,000 to the March of Dimes is Don's name.

Don is an inspiration to not only those that know him, but to the people he helps on a daily basis,” said Warren. “I’m honored to be able to match The NASCAR Foundation’s $100,000 donation to help March of Dimes Kansas City continue on their mission to help ensure the health of babies in our community.”

In 1980, Post was diagnosed with ALS or “Lou Gehrig’s Disease,” and was told he only had three to five years to live. He retired from his professional job and embarked on a 33-year mission of donating his time and talent to charities in the Kansas City metropolitan area. Post has served on boards of directors and executive committees for a number of non-profit organizations and mentored many young children diagnosed with muscular dystrophy. He has been a member on the March of Dimes Bikers for Babies motorcycle ride committee for 12 years, and has been the event’s co-chairman since 2010.

“I am truly blessed to be receiving this award from The NASCAR Foundation and I’m even more thrilled to be able to provide $100,000 to the March of Dimes, an organization that is dear to me,” said Post. “The funds will be used to continue the mission of ensuring healthy babies are brought into this world, especially locally in Wyandotte County where premature births and infant mortality rates are above the norm. My love and thanks goes out to all who supported me in this vote.”

About The March of Dimes
The March of Dimes is the leading non-profit organization for pregnancy and baby health. With chapters nationwide and its premiere event, March for Babies©, the March of Dimes works to improve the health of babies by preventing birth defects, premature birth and infant mortality.