Family to speak at March for Babies at Tarrywile Park on Sunday, April 24 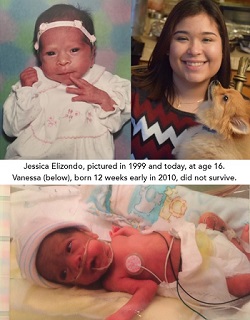 On Sunday, April 24, hundreds from Danbury and its surrounding communities will gather for March for Babies at its new location at Tarrywile Park to benefit the March of Dimes.  Leading the festivities will be the event’s 2016 Ambassadors, Otto and Lorena Elizondo of Danbury, along with their daughter, Jessica, 16. They will thank walkers for their commitment to the March of Dimes mission to give all babies a healthy start, share their prematurity journeys and walk in memory of their daughter, Vanessa.  Since their first walk in 2011, their March for Babies team has raised nearly $12,000.

In early December 1999, Otto and Lorena were looking forward to the January birth of their baby, when unexpectedly Lorena went into premature labor.  Jessica was born at Danbury Hospital 4 weeks too soon and weighed 3 lbs. 14 oz.  She spent 18 days in neonatal care before going home with her parents.  She is now 16 years old and healthy.

In 2010 Lorena and Otto were expecting again, when she developed preeclampsia (high blood pressure during pregnancy).  Their daughter Vanessa, due on August 30th, was born on June 8, 12 weeks early.  She weighed just 1 lb. 10 oz.

Like many premature babies, Vanessa’s lungs were underdeveloped and she received surfactant to help mature her tiny lungs.  Babies with underdeveloped lungs may develop respiratory distress syndrome (RDS) and struggle to breathe because their immature lungs do not produce enough surfactant, a protein that keeps small air sacs in the lungs from collapsing. March of Dimes grantees helped develop surfactant therapy, which was introduced in 1990. Since then, deaths from RDS have been reduced by half.

Sadly, Vanessa did not win her battle with prematurity.  During her 48 days in the NICU, she developed meningitis, and she passed away on July 26th.

“We were so very sad because we went home with empty hands,” said Lorena. “I wanted nothing more than my child to get better so I could bring her home.”

Each year in Connecticut more than 36,000 babies are born.  1 in 10 babies are born too soon, and 1 in 7 infant deaths is attributed to a birth defect, and nearly 200 babies die before reaching their first birthday.  The mission of the March of Dimes is to prevent birth defects, premature birth and infant mortality through research, education, advocacy and community programs.

After their tragic loss, the family connected with the March of Dimes and learned about the organization’s walk event, March for Babies.  In honor of their daughter, Jessica, and in the memory of Vanessa, they formed their first team in 2011.

“We want to share our stories and inspire others to help find a cure for premature birth and other complications, and we hope our story can help others who have also lost a child to begin the healing process,” said Lorena.

March for Babies participants can meet the family and hear their story at March for Babies at Tarrywile Park in Danbury on Sunday, April 24th.  Registration begins at 9:30 a.m. with the walk kicking off at 10:30 a.m.  To register visit marchforbabies.org/event/danbury  or marchofdimes.org/ct.