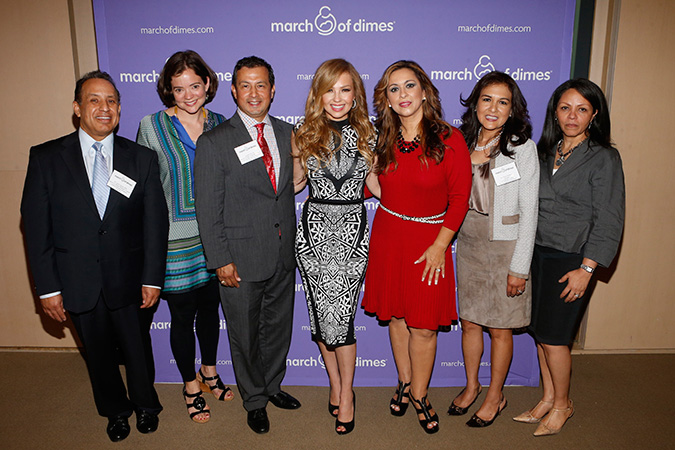 Thalia, a March of Dimes global ambassador and Latin Grammy Award-winning artist, spoke out about the importance of sharing critical pregnancy health information and resources with Hispanic women at a March of Dimes media luncheon, Wednesday, June 4, 2014 in New York. The March of Dimes unveiled a new report today with the latest health statistics for Hispanic moms and babies. (Jason DeCrow/AP Images for March of Dimes)

Hispanic women are significantly more likely to have a baby with a neural tube birth defect, and nearly a quarter of all preterm births in the United States are Hispanic, according to a new report from the March of Dimes.

Thalia, a global ambassador for the March of Dimes, and Latin Grammy Award-winning artist and mother of two young children, is lending her voice to get the word out to Hispanic women about important pregnancy health information and resources available to them.

“I supported this mission even before I became a mom because I appreciate the work the March of Dimes does to improve the health of all babies. I am proud to help with their efforts to focus attention on Latina health. We want women to know that there are things we can do to protect ourselves and our babies, like taking a multivitamin with folic acid before and during pregnancy. There’s nothing more important than the health of our babies,” says Thalia.

Thalia joined Diana Ramos MD, MPH, professor at Keck School of Medicine, University of Southern California, and co-chair of the newly established March of Dimes Hispanic Advisory Council, to speak at a March of Dimes educational luncheon today called Salud: What Hispanic Moms Need to Know to Have a Healthy Baby. They discussed the health risks Hispanic women face and steps they can take to help give their babies a healthy start in life.

“Planning, prenatal care, perpetuating healthy behaviors, are first steps to having a healthy baby. Daily folic acid to prevent birth defects in the baby and a healthy weight are part of planning,” said Dr. Ramos. “Early prenatal care can identify any potential problems. Once you have your baby, continuing the healthy pregnancy behaviors can help you stay healthy and keep your family healthy.”

A greater proportion of Hispanic women have babies each year than any other racial or ethnic group in the U. S., making this population the fastest-growing ethnic group in the country. Although there is great diversity among Hispanic women, there are several health concerns that are common among them, the March of Dimes report says. Babies born to Hispanic women are significantly more likely to have serious birth defects of the brain and spine known as neural tube defects (NTDs). While this disparity is not well understood, one reason may be that Hispanic women have a lower intake of folic acid. In the U. S., wheat flour is fortified with folic acid, but corn masa flour is not. Hispanic women are less likely to report taking a multivitamin containing folic acid prior to pregnancy.

Nationwide, nearly half a million babies are born too soon each year. The U. S. preterm birth rate peaked in 2006 at 12.8 percent. It declined to 11.5 percent in 2012, a 10 percent improvement. Hispanic babies account for nearly one out of every four babies born preterm in the United States.

As a global ambassador for the March of Dimes, Thalia leads health awareness campaigns to reach millions of moms and moms-to-be through television, radio and social media. To help bring more attention to the mission, Thalia has also included the March of Dimes in her publishing and music project promotions, including the launch of her upcoming first children’s album, VIVA KIDS, Vol. 1 in the U.S. on June 24. VIVA KIDS is a nostalgic, cultural and educational CD + DVD comprised of some of the most popular traditional children’s songs, mixed with exciting, New Age pop sounds.

Nacersano.org, the March of Dimes Spanish-language site, offers valuable information on the specific health needs of the Hispanic community, including on the importance of folic acid, a B vitamin that helps prevent NTDs when consumed before pregnancy begins and into the early months of pregnancy.