Family to speak at March for Babies at Lighthouse Point Park on Sunday, May 1 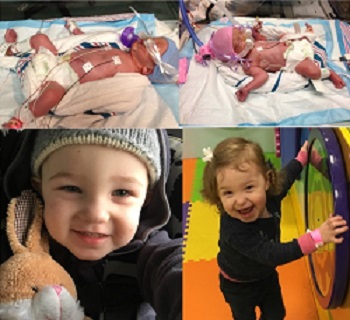 On Sunday, May 1st, hundreds from New Haven and its surrounding communities will gather for March for Babies at Lighthouse Point Park to benefit the March of Dimes.  Leading the festivities will be the event’s 2016 Ambassadors, Garrett and Rebecca Sullivan, along with their two-year old twins, Aaron and Ava. They will share their family’s prematurity journey, thank walkers for their commitment to the March of Dimes mission to give all babies a healthy start, and lead the walk with their team, “Ava and Aaron.”  Since their first walk in 2014, their March for Babies team has raised nearly $6,000.

In early March of 2013, Garrett and Rebecca were looking forward to the late April birth of their twins.  But when a self-check of her blood pressure showed an unusually high number, they went to Yale-New Haven Hospital assuming Rebecca would be examined and sent home to rest.  Instead, she was diagnosed with severe sudden onset preeclampsia (a disorder that occurs only during pregnancy and the postpartum period, affects both the mother and the unborn baby and is characterized by high blood pressure and the presence of protein in the urine). The decision to perform an emergency c-section came quickly.  More than seven weeks too soon, Aaron was born weighing 4 lbs. 4 oz. and Ava weighed 4 lbs. 7.5 oz.

“After the surgery, we heard Ava’s cry, but weren’t able to see her, and from Aaron, born 2 minutes later, there was silence. Once he was cleaned up, they brought him to us so we knew he was okay, and then whisked him away seconds later. I was not able to see my babies for 26 hours or hold them until they were 2 and 3 days old,’ said Rebecca.

The twins spent 17 and 19 days in the neonatal intensive care unit before finally coming home with their parents.

“When people say to me that we were lucky to have a shorter NICU stay, I am left speechless. No mother should ever have to go home without their newborn, or not be able to hold or nurse them when they’re born, for days, and sometimes weeks,” said Rebecca.  “Our time in the NICU forever changed me, giving me insight into a world that I never imagined we would be.”

Each year in Connecticut, more than 36,000 babies are born.  1 in 10 babies are born too soon, 1 in 7 infant deaths is attributed to a birth defect, and nearly 200 babies die before reaching their first birthday.  The mission of the March of Dimes is to prevent birth defects, premature birth and infant mortality through research, education, advocacy and community programs.

Today the family is looking forward to celebrating the twins’ upcoming third birthday and are grateful for their health and continued development.

“After the twins arrived more than 7 weeks early, we realized the importance of raising awareness about prematurity, and that anyone can be affected by it. We hope that by sharing our story we will give a face to this unfortunate phenomena and bring positivity and hope to the families for whom life in the NICU has become a reality,” said Rebecca.

March for Babies participants can meet Aaron and Ava and hear their story at March for Babies at Lighthouse Point Park in New Haven on Sunday, May 1.  Registration begins at 9:00 a.m. with the walk kicking off at 10:00 a.m.  To register visit marchforbabies.org/event/newhaven or marchofdimes.org/ct.