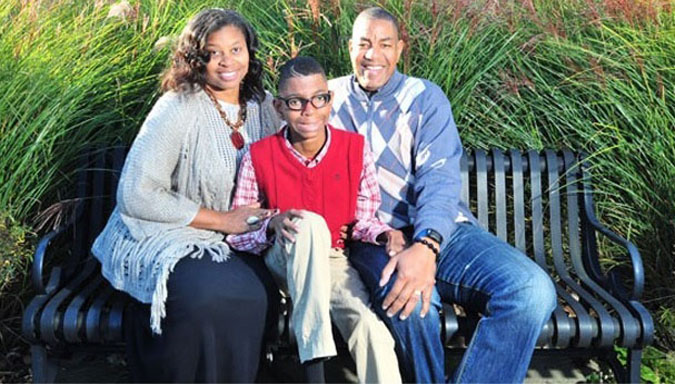 A 12-year-old Chicago boy who survived being born nearly four months prematurely will serve as the March of Dimes Foundation’s 2015 National Ambassador, it was announced today.

Elijah Jackson, despite being an active child, continues to battle the health consequences of his early birth. With his parents Elise and Todd, he will travel the country to share their family story and inspire others to support the March of Dimes and its mission to improve the health of all babies, courtesy of United Airlines.

The Jackson family became March of Dimes volunteers shortly after Elijah was born.

“I saw a public service announcement for the March of Dimes on television. I felt an immediate connection. Here was an organization dedicated to preventing prematurity and saving families from experiencing the heartache and fears we did when Elijah was born. I called the Illinois chapter and immediately became a volunteer,” said Elise.

Elise is a long-time employee of United Airlines, which is celebrating 10 years as the official airline sponsor of the March of Dimes National Ambassador program, playing an integral role in making the ambassador families’ travel schedule possible.

“For 10 years United, its customers and its employees have supported the March of Dimes and these incredible families and their children,” said John Rainey, executive vice president and chief financial officer of United Airlines. “We know that many of our customers’ and employees' lives have been touched by the issue of premature birth, and we are proud to support our co-worker Elise and her family and continue our longstanding partnership with this tremendous organization.” Mr. Rainey is a member of the March of Dimes National Board of Trustees and serves as the national chair of the 2015 March for Babies®, the organization’s premier fundraising event.

Like Elijah, about 450,000 babies are born too soon in the United States each year. Preterm birth (birth before 37 weeks of pregnancy) is the leading cause of newborn death, and babies who survive an early birth often face an increased risk of a lifetime of health challenges, such as breathing problems, cerebral palsy, intellectual disabilities and others. Even babies born just a few weeks early have higher rates of hospitalization and illness than full-term infants. It is a serious health problem that costs the United States more than $26 billion annually.

In 2002, Elise and Todd Jackson were eagerly awaiting the birth of their first child. Elise’s pregnancy appeared to be progressing normally, until, at 20 weeks, she awakened one morning to find that her water had broken. Elise went to a hospital, but since active labor contractions had not yet begun, doctors administered IV fluids and advised bed rest.

A month later, Elijah Jackson was born at 25 weeks and one day of pregnancy – about 15 weeks too soon. He weighed one pound and one ounce. He was 11 inches long, the length of a sheet of business paper. Initially, he was given only a 10 percent chance to survive and spent seven months in a hospital neonatal intensive care unit. He underwent several delicate surgeries in the early weeks of life, and has been through years of physical, speech and occupational therapy for the long-lasting health consequences of his early birth. For his first two years he had a tracheotomy (open airway in the windpipe in his neck) to help him breath, and was unable to speak. Today, Elijah’s speech is greatly improved but he still has developmental delays and is enrolled in special education classes.

“The Jackson family’s story and their volunteer work for the March of Dimes stand as living proof of the life-saving measures supported and developed as a result of the organization’s commitment to research and educational programs to help give all babies a healthy start in life,” said March of Dimes President Dr. Jennifer L. Howse.

“One day we were filled with hopes and dreams for our first child, then, suddenly, we were faced with the enormity of the consequences of our son being born prematurely and having to literally fight for his life,” added Elise.

In addition to the emotional cost to the newborn’s parents, the financial cost for medical care can be daunting- as well. According to the March of Dimes, which commissioned an analysis by Truven Health Analytics, Inc., the average medical cost for a healthy, full-term baby from birth through the first year was $5,085, of which $4,389 is paid by employer health plans. For premature and/or low birth weight babies (less than 37 weeks gestation and/or less than 2500 grams), the average cost was $55,393, of which $54,149 was paid by the health plan. Fortunately, for Elise and Todd, United’s employee medical benefits provided the Jacksons with the ability to provide Elijah with quality care.

March for Babies is sponsored nationally by the March of Dimes number one corporate supporter Kmart, and top sponsors Famous Footwear, Macy’s, Cigna, United Airlines and Mission Pharmacal. Find out how you can help prevent premature birth and birth defects by joining March for Babies at marchforbabies.org