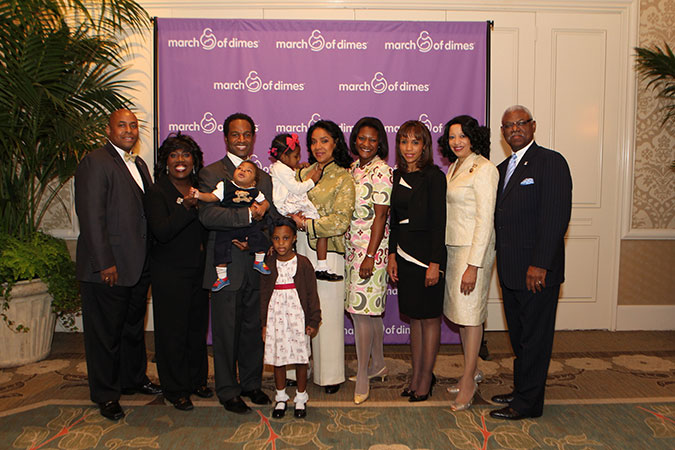 In honor of Black History Month, the March of Dimes hosted a breakfast at the Four Seasons Hotel here for celebrity volunteers, corporate supporters, and national service partners to discuss the alarming rates of premature birth in the African-American community. The event was hosted by Tony Award-winning actress Phylicia Rashad (photo center, holding child) and featured March of Dimes 2011 National Ambassador, Lauren Fleming, age 7, and her family.

Each year more than a half a million babies in the United States and 55,000 babies in California are born prematurely. African-American infants are almost twice as likely as Caucasian infants to be born prematurely. Non-Hispanic black women are disproportionately affected by preterm birth and experience the highest rate of preterm birth, 18.5 percent compared to the national rate of 12.8 percent (NCHS 2006).

This breakfast was the first of two events being hosted by the March of Dimes to commemorate Black History Month. The second will be held in Washington, DC on February 16th at the U.S. Chamber of Commerce. This invitation-only reception is a networking opportunity and with a national briefing on measures the March of Dimes is taking in the African American Community to prevent premature birth, birth defects and infant mortality. The evening will include special recognition for supporters and highlights of the history of African Americans supporting March of Dimes mission.