Family to speak at March for Babies at Quassy Amusement Park on Sunday, May 1st 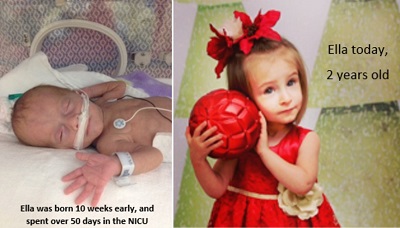 On Sunday, May 1st, hundreds from the Greater Waterbury area will gather for March for Babies at Quassy Amusement Park to benefit the March of Dimes.  Leading the festivities will be the event’s 2016 Ambassadors, Lauren Hill and Daniel Lapinski, along with their two-year old daughter, Ella. They will share their family’s prematurity journey, thank walkers for their commitment to the March of Dimes mission to give all babies a healthy start, and lead the walk with their team, “Ella Zina Preemie Power.”  Since their first walk in 2015, their March for Babies team has raised over $3,000.

In December 2013, Lauren and Daniel were looking forward to the March birth of their daughter.  But two days before Christmas, at just 28 weeks pregnant, Lauren, recognizing symptoms of preeclampsia (high blood pressure during pregnancy) from an article she had read the day before, went to her doctor and was immediately admitted to labor and delivery at Saint Mary’s Hospital in Waterbury.  On December 26, for the safety of both mom and baby, Ella was delivered and weighed just 1 lb. 14 oz.

“There are so many emotions when you realize that something is going wrong.  I wondered why this was happening, if we had done something wrong. How did I get preeclampsia? Would she be okay?” said Lauren.  “I wasn’t even sure what a one pound baby would look like. The thoughts are endless.”

Like many premature babies, Ella had many health complications.  After 10 days in the NICU at Saint Mary’s Hospital, Ella was emergency transported to the NICU at Yale-New Haven Hospital to treat an atrial flutter, a condition in which the heart's upper chambers (atria) beat too quickly.  She experienced blood pressure and blood clot issues, and had a double inguinal hernia surgery.  After 26 days, she was transferred back to the NICU at Saint Mary’, ultimately receiving neonatal intensive care for 57 days before going home.

“Today Ella is two years old and loves puzzles, ABCs, music and dancing,” said Lauren.  “It was clear from the beginning that she was feisty and a fighter and she still is!”

Each year in Connecticut more than 36,000 babies are born.  1 in 10 babies are born too soon, and 1 in 7 infant deaths is attributed to a birth defect, and nearly 200 babies die before reaching their first birthday.  The mission of the March of Dimes is to prevent birth defects, premature birth and infant mortality through research, education, advocacy and community programs.

“When I was introduced to the March of Dimes, I had no idea there was such a large community of people who knew exactly what we had been through, because they had been through it too,” said Lauren.  “We need to continue the fight to end premature birth so that parents don’t have to go through this, and more importantly, so that the babies don’t have to go through this.  It’s important for Ella and her preemie friends to know their stories, so they can share, raise awareness, help other families in the future.”

March for Babies participants can meet Ella and hear their story at March for Babies at Quassy Amusement Park in Middlebury on Sunday, May 1st.  Registration begins at 10:00 a.m. with the walk kicking off at 11:00 a.m.  To register visit marchforbabies.org/event/greaterwaterbury or marchofdimes.org/ct.