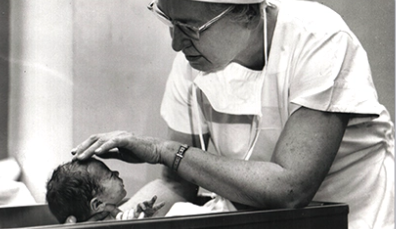 Virginia Apgar, MD, (1909-1974) was an obstetrical anesthesiologist best known for developing the Apgar score, a system used worldwide for evaluating the physical condition of newborns at birth. Her career spanned the fields of medicine and public health, and she became a pivotal figure in redirecting the March of Dimes mission in the 1960s from polio to birth defects and other infant health problems such as premature birth. In fact, she was the first medical leader at the March of Dimes to recognize prematurity as serious problem that demanded a focus on the importance of early prenatal care and healthy pregnancy.

More than that, Virginia Apgar was an irrepressible and charismatic champion for babies whose wit and lively personality captivated everyone she encountered in her constant quest for improvements to maternal and infant health.

Born on June 7, 1909 in Westfield, New Jersey, Virginia Apgar attended Mount Holyoke College in Massachusetts and studied medicine at the College of Physicians and Surgeons of Columbia University in New York in the 1930s, intending to become a surgeon. Disappointed by the limited career opportunities at the time for women in surgery, she turned to anesthesiology just as it began to develop professionally as a medical specialty. Ultimately, Dr. Apgar headed the division of anesthesiology at Columbia to become the first woman there to hold the position of full professor. Yet her greater achievements were still to come.

At a time when fetal monitors were not yet invented and babies were given scant attention after birth, Dr. Apgar began to question how best to evaluate the newborn infant to improve health and survival rates. By the early 1950s she had years of experience observing the effects of anesthesia on mother and child during labor and delivery. In 1952, she created a simple but effective five-point scoring method designed to focus attention on the newborn’s vital signs. Performed immediately after delivery, the Apgar score measures an infant’s skin color, pulse, reflex, muscle tone, and respiration, quickly indicating whether the newborn needs immediate attention to stay alive. In essence, the Apgar score was revolutionary because it was the first clinical method to recognize the newborn’s needs as a patient. It helped spur the development of neonatology as a medical focus, establishing the need for protocols and facilities such as the newborn intensive care unit to provide specialized care.

The Apgar score is still in use today throughout the world as a standardized newborn scoring system. Its effectiveness lies in part in its simplicity, and it originally helped to predict newborn survival and reduce infant mortality. Yet as the Apgar score stimulated research in diagnosis and treatment of many disorders of the newborn, Virginia Apgar herself turned to the March of Dimes to satisfy her career aspirations in the field of public health. In 1959, she joined the foundation to direct its programs on birth defects prevention, and she consolidated her reputation not only as a medical leader but as an educator and publicist about the new mission of the March of Dimes.

Dr. Apgar’s 15 years with the March of Dimes, 1959 to 1974, were filled with a panorama of activity that encompassed research, education, program development and publications. After a severe epidemic of rubella (German measles) in 1964 and 1965 that resulted in thousands of birth defects and fetal deaths, she initiated March of Dimes programs to promote rubella immunization, urging the passage of a bill that included appropriations for such immunization before a U.S. Senate committee in 1969. Similarly, she promoted the effective use of Rh immune globulin (RhoGAM) in pregnant women to prevent hemolytic disease of the newborn due to Rh incompatibility. Dr. Apgar also capitalized on the success and popularity of the Apgar score by featuring it in a March of Dimes film "Apgar on Apgar" in 1966.

Dr. Apgar never tired of finding opportunities to focus attention on the well-being of babies in the delivery room. She always believed that it was a primary responsibility of her educational efforts for the March of Dimes to help remove the stigma of birth defects. As the foundation increasingly embraced the new field of perinatology, Virginia Apgar's outreach came to embody a pithy March of Dimes slogan of the 1960s: "Be good to your baby before it is born." She became Vice President for Medical Affairs in 1968 and by the end of her career had authored more than 70 publications on anesthesiology, newborn resuscitation and birth defects. Always attentive to the needs of parents and especially mothers, she wrote the popular book Is My Baby All Right? (1972), with co-author Joan Beck, to help advance the understanding of birth defects for a consumer audience.

The capstone of Dr. Apgar's March of Dimes career led to developments that she might have predicted but did not live long enough to witness herself. In 1972, Dr. Apgar helped to convene the first Committee on Perinatal Health. A joint effort of the American Medical Association, the American College of Obstetricians and Gynecologists, the American Academy of Family Physicians, the American Academy of Pediatrics, and the March of Dimes, this committee deliberated for four years on a plan to improve maternal-fetal health and reduce infant mortality. In 1976, the committee produced the landmark study, Toward Improving the Outcome of Pregnancy, which set forth a model for the regionalization of perinatal care in the United States. Dr. Apgar, however, did not live to see the implementation of this report as she died in 1974.

Virginia Apgar's friends, associates, and students saw her as a caring, enthusiastic teacher, colleague, and physician who had super-abundant energy and talents as wide-ranging as piloting an airplane, performing chamber music, and constructing her own musical instruments. In 1994 the U.S. Postal Service memorialized her with a postage stamp issued at a meeting of the American Academy of Pediatrics – which, in turn, honored her by establishing the Virginia Apgar Award in Perinatal Pediatrics.

It has been said that every baby is first seen through the eyes of Virginia Apgar. The year 2009 marks the 100th anniversary of Dr. Apgar's own birth, and the March of Dimes is taking this opportunity to call attention to her enduring legacy in improving the health of babies.

Lead the fight for the health of all moms and babies with a career at March of Dimes.