Expecting twins may have been a surprise for Silvia and Jean Paulo Lasmar, but it was also a dream come true. That all changed at month six when during an ultrasound they learned that Chiara, their baby girl, was no longer alive. “It was a nightmare because I had life and death inside of me,” said Silvia. But the doctor’s last words were very impactful. “He said, ‘don’t forget there’s a beautiful boy in there who needs you to be strong,’” Jean Paulo recalls. “That advice wasn’t just comfort, it became our biggest purpose in life.”

But things took a turn for the worse when, at the end of week 27, Sylvia felt a sudden pain and was admitted to the hospital. “I was determined to hold him for 40 weeks no matter what,” Sylvia said. “I was focused on the baby, thinking of him 100 percent of my time, checking if he was moving. I spent my days with a feeling of fear mixed with some depression.”

Silvia went into labor early at 28 weeks. Chiara was delivered naturally, Gabriel by C-section. He was tiny, weighing just two and a half pounds and had pneumothorax, a dangerous respiratory condition. Silvia and Jean Paulo couldn’t hold him—they could only give him a little kiss before he was taken to the NICU.

Gabriel stayed in the NICU for two months. Silvia and Jean Paulo were scared and filled with questions. One day a nurse brought them a photo album with many pictures of NICU babies connected to wires and tubes on one side, and the same but older and healthy child on the other. Jean Paulo said, “We learned that it’s more painful for us to watch our babies in the NICU, but they’re stronger than we can imagine. They’re born with survival instincts.”

Now their dream has finally come true. Gabriel is healthy, happy and loving. Considering how behind he was in terms of development, his parents are thrilled that he has caught up, and is perfectly normal for his age. 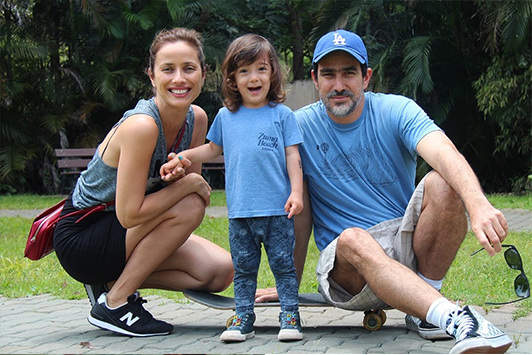 As a filmmaker and director, Jean Paulo began documenting his wife and son soon after Gabriel was born, and has continued ever since. He created this video as a gift to March of Dimes to offer hope to all families, especially during this uncertain time we live in. “Sharing Gabriel’s story is the best way we can support the cause,” he said. “Just like that photo album gave us strength and hope to move forward in the NICU, I wanted Gabriel’s story to do the same for the families in need.”