Lisa: I got pregnant with our fraternal twin girls at 39 through IVF. No one told us that it was considered a high-risk pregnancy, but because of the way I got pregnant, my age and the fact that I was carrying twins…it was treated like it and I had blood tests and ultrasounds frequently throughout my pregnancy.

At 22 weeks my cervix started getting smaller and the doctor did a small procedure and put me on house arrest. Then, at 26 weeks, the doctors became concerned about my placenta, too..

Jon: Early in the pregnancy we were told that 28 weeks was an important milestone in Lisa’s pregnancy.  We were both relieved when a few days before that milestone, Lisa’s test results showed that the girls had a 99 percent chance of making it at least 2 weeks past the deadline. 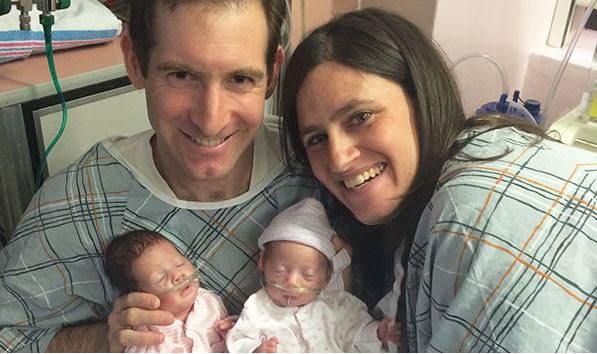 Lisa: On the morning of March 31st, after a sleepless night and some early morning conference calls, I started bleeding, called Jon and took a cab to the hospital, New York’s Mount Sinai. I panicked that we were going to lose the girls. Once I was examined, the doctor told me that my placenta had abrupted and that the babies would be born that day.

Jon: Lisa called me at work to tell me. I wasn’t thinking the worst but she was. I was so focused on keeping her from losing it that I couldn’t focus on the big picture or even think how serious things were. When they wheeled Lisa in, they told me it would be two hours for me in the waiting room. I was not looking forward to being alone with my thoughts. Then, like in a scene from a sitcom, the good news came—they rushed to grab me and brought me in for her emergency c-section in the operating room.

Jon: I saw the babies first, by myself. I was surprised by how long, skinny and red they were. Given that they were both only around 2 pounds, I expected tiny peanuts! After the first day, the girls were always next to each other in the NICU.

Lisa: Jon saw the babies first, without me. I didn’t mind, because I just wanted to know that they were doing well.

Jon: You don’t ask for the NICU, but the experience had some silver linings. When we took the girls home, we weren’t clueless first-time parents because we had three months of training with the nurses to guide us and teach us how to bathe them, change their diapers and care for them. Plus, the girls were already on a sleep schedule. 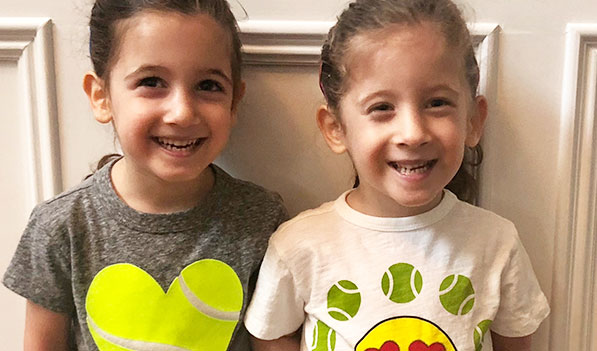 Lisa: Our time in the NICU went about as well as we could’ve hoped. There is a saying in the NICU that “It’s two steps forward and one step back,” and that’s so true. While everything felt momentous at the time, the girls’ progress had no catastrophes, just a few minor hiccups.

Jon: While we were so impatient to get home with the girls, we were also hoping they could go home together. They’d been sleeping together, in a crib, for the final 3 or 4 weeks and Rachel was off her feeding tube before Jill was cleared to leave.

Lisa: The nurses made all the difference. We spent so much time in the NICU and they helped us with our babies on a day-to-day basis. I was one of the lucky ones to be able to work from the NICU—I wanted all the details. I took one month off, and then worked out of the hospital and our house for 6 weeks—so I could preserve as much of my maternity leave as possible for when the girls finally came home. They were born on a Monday and Jon was back to work the following Monday.

Jon: I visited the hospital every morning and night. I basically just wanted a thumbs-up from the doctor each day to know that the girls were doing well. We were ecstatic when we heard they could go home together. After 71 days in the NICU, it made the day we left that much more special. We were able to go home as a family.

Lisa: We’re still friends with two of the nurses and we keep in touch with our doctor.

Jon: The bond you develop with the nursing staff is incredible. I just can’t say enough. These are the people who kept our kids alive. Later we made a donation, which they used to upgrade their break room! We’ve been back several times every year to visit. We loved seeing the NICU success stories when we were in the NICU and we love sharing ours.

Lisa: At 4 years old, the girls are doing great. They’re happy and healthy and enjoying preschool.

Jon: We first heard of March of Dimes when we were in the NICU, but we didn’t do our first March for Babies until 2016, when the girls could actually do the walk. They walked with their NICU “triplet”—the baby who was in the incubator next to theirs! We will definitely keep walking. It’s an amazing day and also bittersweet to see people walking in memory of babies who didn’t make it. That really makes it clear how lucky we are.