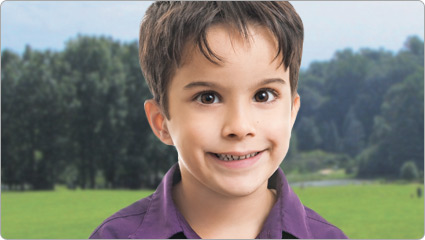 “My husband, Shane, and I never once thought of pregnancy as a life-or-death event,” Shalini Wittstruck recalls. “Then one day our lives and all our expectations changed.” Their son, Kieran, was born at 31 weeks, and just 3 lbs., 1 oz. He spent the first month of his life in the newborn intensive care unit (NICU), battling anemia, jaundice, apnea, bradycardia, a heart murmur and a brain cyst. With medical advances supported by the March of Dimes, Kieran pulled through.

Now 5 years old, Kieran still flips expectations on their head. Outside his home near Seattle, he likes to ride his bike and swim. He also is a budding mechanical engineer and is always working on his next great invention. And if that wasn’t enough, he even runs his own cat spy agency: MEOWS!

From his difficult start to the creative kindergartner he is today, Kieran’s story is a happy one. “We are thankful every day for how far he has come,” says Shane. I didn’t think premature birth could happen to me, but it did,” says Shalini, who has served as co-chair for the Cigna March for Babies® team in Seattle since 2007. “We need the March of Dimes to make sure it won’t happen to you.”

As the 2012 March of Dimes National Ambassador, Kieran will travel the country with his parents, sharing his story and raising awareness. Read Kieran’s blog to follow his adventure.