My daughter Reign was born early due to me having preeclampsia and HELLP syndrome. While we were on vacation, I started getting really sick. I was able to come home early and upon arriving at the hospital, I found out that my blood pressure was very high and I was in liver failure, so she had to come quickly. Reign was born at 26 weeks via emergency C -section, weighing 1 pound, 15 ounces. 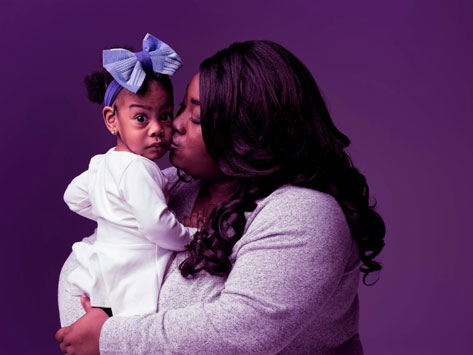 I'd always heard the statistics, but it wasn't until this experience that I realized how often African American woman are either not believed or the proper precautions are not taken even with the odds stacked against us. I had seen a doctor about four days before my vacation who told me that I was perfectly fine, that everything was great. I mentioned my feet had begun to swell and was told, “You're nearing third trimester. That's perfectly normal.” In every other appointment I had gotten multiple blood tests and other things done, but this one I didn't. And had they done that, it probably could have kept me pregnant a little bit longer.

Even upon arriving at the hospital, when I said my head hurt and my legs were swelling, they kind of looked at me like, “Oh, you're probably fine.” But after they hooked up the blood pressure cuff they said, “Oh no, you're not fine. You’re definitely not fine. Let's get you to the emergency room.” So, unfortunately, the odds are stacked against us with genetics. But also when it comes to learning how to care for minorities, I think a lot of agencies are just not well equipped. Hopefully the statistics will raise more awareness, especially through March of Dimes’ “It’s Not Fine” campaign.

Reign is a fireball. I often say she’s a lifesaver in so many ways. When I asked, “How’s my baby?” the nurses would answer, “She's sassy.” I walked up to the incubator and was expecting to see this itty-bitty baby looking really helpless—not the case. She was kicking and pulling out the tube. She fought from the start and that gave me the passion to fight for her because I was still very ill myself, battling liver failure and other things. When I saw her I told myself, “I can't just lay here, I've got to fight. Look at her, she's only a pound and she's fighting.”

Every step that Reign Victoria’s taken in her development completely defied the odds of 26-weekers. She's just amazing. There’s no better way to say it.

I think the It’s Not Fine campaign is purely genius of March of Dimes. So often symptoms of African American women and minorities are not believed. Things are swept under the rug. This campaign is shining the light on the American health care system to say we have to do better. There's no way that we should be who we are as a country and still be among the leaders of maternal and infant deaths.