My husband Carter and I found out we were pregnant just two or three weeks into the pregnancy because I started to get really sick. At six weeks I started bleeding a lot and was told that I was having a miscarriage and should expect to lose the baby. I stayed on bed rest at home, bleeding heavily and thinking I was going to lose the baby. 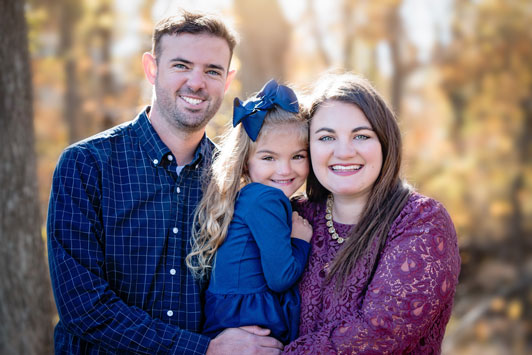 I went to my doctor once, sometimes two or three times, a week to check on things. At 20 weeks my cervix tore and I needed surgery to stitch it up and stay pregnant. At 21 weeks I went into active labor. Our local hospital wasn’t equipped to handle micro preemies, so I was told that I couldn’t transfer hospitals until I was at 24 weeks.

At 23 weeks my doctor said, “If we have any hope of the baby surviving, because it's definitely going to be born soon, we’ve got to get to another hospital.” I was put in an ambulance and sent to Fairfax. Four days later, the night before Thanksgiving, I had an emergency C-section due to a placental abruption on top of a lot of blood clotting, which made me bleed throughout the pregnancy.

We didn't know if we were having a boy or a girl, so that was maybe the only exciting moment of the day. Sarah came out crying, which was a good sign, and was quickly intubated and rushed to the NICU. That first 48 hours I couldn't see her because I was too weak to get out of bed.

Sarah was in the hospital for four months, and it felt like the hardest time of my whole life. It was scary not knowing whether or not she would make it. But she got stronger to the point where I felt more confident that I could take care of her. We were trained on everything we needed to know and brought her home. That was when the hardest moments began.

We had no idea Sarah was coming home until two days before. Carter and I were living at the Ronald McDonald house—we had an apartment, but hadn't moved in yet. We had a lot to do in 48 hours. We didn't have a baby shower or anything, so we didn't have things for a baby. I told the nurse and she said, “Don't worry, we’re going to get you what you need.” They gave us clothes, diapers, wipes and more to take Sarah home.

That first year home was rough. We made several trips to the emergency room, and once a month we would be hospitalized again. Her lungs were just not developing. We were always at the doctor and on a lot of medications. She suffered with pneumonia and collapsed lungs for a very long time.

I'd say at four years old she finally started getting healthier. Sarah’s almost six now, and we haven't been hospitalized in two years. She’s amazing—the cutest, sweetest, funniest, most lovable kid. I'm so proud of her because she's been through so much and made it out on top.

In our family the lasting effects of prematurity are more on me now. Now that Sarah’s so much healthier and happy, I finally have a chance to relax—and when I do I get emotional. So now I have to try to deal with all that’s happened. And it's hard to think about probably not being able to have another kid. Thankfully the one we have is perfect and I couldn't ask for more. But it's definitely hard now in this new wave that we're going through.